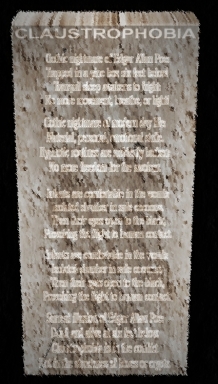 **
The origional post with this poem Claustrophobia has a typo in the image that I was to lazy to fix.
this the poem again with a new image, just in time  for halloween!

Infants are comfortable in the womb:
Isolated slumber in safe cocoons.
Then their eyes open to the black,
Provoking the flight to human contact.

Babe’s first reach toward mother’s breast
Is his hands first stretch away from loneliness.
When babe grows up he’ll perceive a shock,
Of other hands squeezing him into a box.

Surreal illusion of Edgar Allan Poe:
Dead and alive at six feet below.
Claustrophobia is in the conflict
Not in the structures of boxes or crypts.